I’m a bit of a word nerd. Okay, more than a bit. I enjoy finding the right word to communicate a shade of meaning — do I use aroma, scent, odor or reek? And one of the things I love about English is that it’s such a mishmash of other languages (full disclosure, I only know a smattering (or soupçon) of other languages so this is a little bit of linguistic navel gazing).

In no particular order (because how can one choose a favourite), are 10 of my favourite words in English that come from other languages.

I like to think of this as someone who gets involved in muck they have no business being involved in. It has an inherent tone of condescension to me.

Apparently this comes from Chinook Jargon in my own neck of the woods, though it’s not listed on the Wikipedia page , despite being in more common usage that the words they list. Though my favourite word from Chinook jargon is skookum, though it’s taken on a slightly different meaning, at least locally. Rather than being “strong” or “reliable”, it’s more “really good” – that was a skookum perfomance.

Given that I write dark fantasy, how can I not include ghoul in my list? This one is from the Arabic word ghul, and apparently is also sometimes used to describe a greedy or gluttonous individual in colloquial Arabic. For some reason, I envision the pretas from my post on creatures from Indian mythology.

Penis. It means penis in Yiddish. Or more colloquially, in English, dick. Do I need to say anymore?

Okay, according to Merriam-Webster, a stupid, foolish, or ineffectual person. But you can also say ‘putzing around’. It is what it is.

This one takes English bastardization to a new level. It comes from Chinese but bears NO resemblance to the meaning in the original language (thank you, Wikipedia). It comes from a shortened version of “gōngyè hézuòshè”, which was the name for a particular orginization, the Chinese Industrial Cooperatives. It’s use can be traced through the US Marine Corps back to an officer who wanted to emulated to spirit of working together that he’d seen in China.

(BTW, I discovered another interesting life looking up this word’s etymology: Rewi Alley.)

A strong, yearning, aching desire to wander, to travel and explore the world.

Okay, I might have extemporized on that one (extemporize: ad lib, improvise, do something in the spirit of the moment). I have wanderlust. I want to travel way more than I do. Thank heavens for the internet, which I can get some, small vicarious satisfaction from other people’s travels.

This one actually comes from German, which has shared a fair few words with English (angst, kaput, or another favourite, used in a sentence — “I sent the spider abseiling over the balcony”). 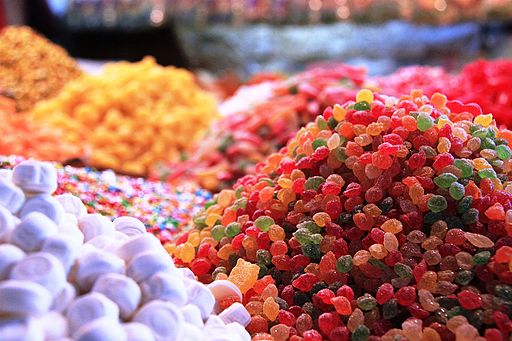 Do I need to define this one? Candy, sweets, lollies. Did you know that word candy comes from Arabic? Though it did come into English a long ways back. And might have come from Sanskrit originally.

I learned it was from Arabic because a tour guide suggested that it might be the source of the name of Chania on Crete (awesome place to visit btw). My own research suggests that he was speaking out of his …. well, that it doesn’t come from the Arabic word for “candy”.

This is another well travelled word that shouldn’t need any definition (I had to include the picture though — The Coffee Bearer by John Frederick Lewis). From Arabic to Turkish to Dutch to English…and countless other languages around the world. Even in Korean it’s keopi.

Okay, I think I’ve officially gotten sidetracked. Chocolate comes from the Nahuatl chocolatl, meaning simply ‘food made from cacao seeds’. One of the things I love about chocolate, beside the taste, is that it’s high in iron. A measly 1 oz has 12% of your daily requirement.

Of course, that delicious piece of chocolate can come loaded with guilt. The countries and people that produce it often pay a hefty price. And there’s a couple of virulent viruses that threaten the world’s cacao trees.

Okay, back on track….

Colloquially, alcohol is a liquid that is produced by the natural fermentation of sugars, the key component of wine, beer, spirits, and other drinks. Used for intoxication. Okay, it has other uses. And can also mean “any of a class of organic compounds that are … that are hydroxyl derivatives of hydrocarbons” (Merriam-Webster).

Some of the other ‘al-‘ words include algebra, chemistry (via alchemy) and algorithm — and if you leave the As, you see even more of our scientific and mathematical terms coming from Arabic. If you’re keen on the history of words like I am, and know a bit of Spanish, check out the PeppyBurro’s post on Spanish words of Arabic origin.

It’s time for a nap, especially after the candy, coffee, chocolate and alcohol. Maybe a little afternoon nap — or siesta — will help with the stomach ache.