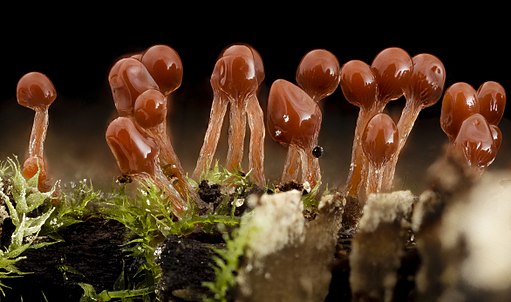 I’m a bit of a word nerd. Maybe it comes with being an avid reader and nascent novelist. While writing A Scarlet Fever, it was a great opportunity to put that to use. I kept a running list of my favourite sickly, icky words that hinted at death and disease.

(Okay I actually think those little fungi are cute, despite their moist, viscous, oozing slime).

Why is phlegm a gross word? Well, there’s the snot-like sputum that you expel if your hacking is successful. Or the gurgling sound as it rattles around in you chest. Strangely neither snot nor sputum made my like, but gurgle did.

I don’t know why gurgle made the list. I think for me I associate it with viscous liquid, something thick and slimy and noxious.

I love how it even sounds thick and gelatinous and sticky and oozy. It’s a bit of pain when you also use the word vicious…always misspelling vicious.

That soft sucking sound of a boot being claimed by the oozing mud. Or a monster treading through the broken bodies of its prey. Say it out loud – it’s a word that sounds viscous.

I told you mucus would make an appearance.

Mucus is something we’re all well familiar with, especially during cold, flu and allergy seasons…oh, wait, that’s all year. And you can’t have a list of festering words without this slimy, sickly green secretion…why did secretion not make the list?!

The fleshy, droopy source of gurgling in all sorts of creatures.

I never thought of jowls as gross, but I did a search of words that squick people out (squick should be here), and jowls was on the list, so I added it to mine. I don’t know how I feel about that, given that I’m pretty sure I’ll have my own jowls in years to come. Is this a trigger word for anyone out there?

Slurp kind of goes along with squelch for me. It’s the sound of the beast sucking the marrow from its victims’ bones.

When I was a kid, someone (Dad) taught me his own rendition¹ of the great green gobs song…which I later shared when I taught English in Korea. The key to really making it gross is doing the slurping sound at the end.

To seep in a slow and, often, unappealing way.

Although I admit that sometimes chocolate oozes out of a lava cake, more often I use ooze where it has a negative connotation. It reminds me of walking in this little river in the mountains of BC when I was a child, the muck squelching up from the bottom, bringing with it little burps of tadpoles between my toes. Or some slick salesman oozing charm, rather than sincerity and respect for my intelligence.

To become septic, form pus, deteriorate and be eaten away.

Fester brings to mind the putrefaction of a rotten wound being gnawed away, seeping with pus. Sometimes you just don’t want to use all of those words, and wish you had one simple word to … and then there’s fester. No list on the language of pestilence would be complete without this jack-of-all-trades word.

For some reason moist always seems to top the list of English words that make people’s skin crawl.

There are words that mean almost the same thing that we don’t have the same issue with – dewy, misty, damp, humid. Even dank, which is what used more often in the book; it fit the tone better. But moist was on the list.

What about you…what words squick you right out, make your skin crawl, make you shudder? Or are there words you love to use to get that reaction from others?